Topographical elements are often focal points in many historical and fantasy maps. Mountains and rivers, shorelines and steppes, swamps and rolling hills, it’s easy to see why topographers found and still find these elements important. They shape the world around us. They influence lore, legend, and ultimately culture. They challenge humanity.

Yet, in many parts of the world, these features are often nonexistent. Take Eugene Henry Fricx’s Cartes des Paysbas et des Frontieres de France—an incredibly detailed 18th Century atlas of northern France and Belgium that was first published in 1712, then improved upon over a period of twenty-one years before being republished in 1727. If you’ve been to that part of the world, you’ll understand immediately why those features aren’t present. Much of Northern France and Belgium is incredibly flat. I spent some time there earlier this year and while the countryside and farmlands (and beer) are beautiful, I can see how a cartographer would instead choose to focus on other details.

It’s with that introduction that I’m excited to share my latest brush set: Harrewyn. Named after the Dutch engraver Jacobus Harrewijn who may or may not have been dead when this atlas was finished in 1727. While a few landforms and flora symbols persist—hills, forests, and the occasional swamp—they’re not the focus. Instead, Harrewyn chose to emphasize towns and villages, cities and manor houses, farms and windmills, gallows and chapels. It’s a map focused on the developed over the natural.

Most of these signs were extracted from a pair of corresponding plates take around the Lille and Menin regions (‘10-‘11). The result is a unique brush set with a style that I hadn’t seen before. The traditional influence is apparent, but Harrewyn has added his own flair and it makes these brushes unique. Perfect for a wide variety of projects.

I took some liberties in the organizing—the concepts of Chateaus, Castles, Villages, and Bastides are rough ones and historical documents aren’t clear. Legends weren’t common and usage can be difficult to decipher. (If you have any insight I might have missed, please let me know!) That said, like all of my sets my organization is merely a rough guide. In fantasy maps, anything goes—these signs and symbols represent whatever you want. It’s your project.

Harrewyn is an enormous set, inside you’ll find over 500 brushes, including:

(I told you it was a lot.) The button below links to a ZIP file that contains a Photoshop brush set (it’ll work in GIMP as well) as well as a set of transparent PNGs in case you’re using a program that doesn’t support Adobe brush files. I’ve separated them by type, Settlements, Flora & Landforms, and Points of Interest & Cartouches. They’re black, and they’ll look broken if viewed in Chrome, but trust me, they’re all there.

As with all of my previous brush sets, Harrewyn is free for any use. As of July 2019, I now distribute my sets with a Creative Common, No Rights Reserved License (CC0), which means you can freely use this and any of my brushes in commercial work and distribute adaptations. (Details on this decision here.) No attribution is required. Easy peasy!

Enjoy Harrewyn. Feel free to show me what you created by sending me an email or finding me on Twitter. I love seeing how these brushes get used, and I’d be happy to share your work with my readers. Let me see what you make!

Want to see this brush set in use? I put together a sample map using Harrewyn and you can see a few variants below. Just click on any of the images below to view them larger. 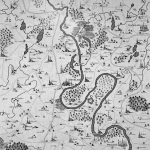 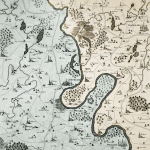 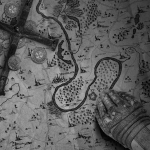 If you like the Harrewyn brush set (or any of my free brushes, really) and want to support my work, instead of a donation, consider buying one of my speculative fiction novels. The first book—The Stars Were Right—is only $2.99 on eBook. I think you’ll dig it. You can find all my books in stores and online. Visit bellforgingcycle.com to learn more about the series. Tell your friends! 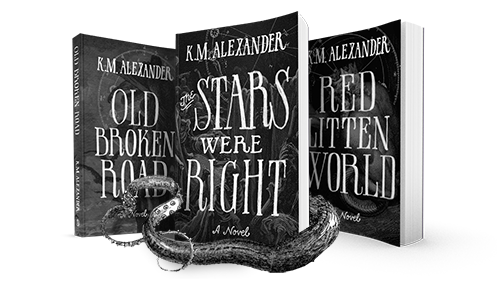 Harrewyn isn’t the only brush set I’ve released. You can find other free brush sets with a wide variety of styles over on my Free Stuff page. Every set is free, distributed under a CC0 license, and open for personal or commercial use. I’m sure you’ll be able to find something that works for your project.

This set has quickly become a favorite and it’s perfect for a wide variety of projects. The brushes are taken from 1746’s A Map of the British Empire in America by Henry Popple and it has a fresh style that does a fantastic job capturing the wildness of a frontier. Plus it has swamps! And we know swamps have become a necessity in fantasy cartography.

While not my most extensive set (a little over one hundred brushes) Donia boasts one of the more unique takes on settlements from the 17th century. If you’re looking for flora, I suggest checking out other sets, but if you want to pay attention to your maps cities, towns, castles, churches, towers, forts, even fountains then this is the right set for you.

Based on Joan Blaeu’s Terræ Sanctæ—a 17th-century tourist map of the Holy Land—this set includes a ton of unique and varied signs as well as a large portion of illustrative cartouches that can add a flair authenticity to any fantasy map. Elegant and nuanced, everything works within a system, but nearly every sign is unique.

An 18th Century brush set based on a map from 1767 detailing the journey of François Pagès, a French naval officer, who accompanied the Spanish Governor of Texas on a lengthy exploration through Louisiana, Texas, and Mexico. A unique southwestern set with a few interesting deviations—including three volcanos!

A departure from the norm, this set is based on the Plan Batalii map which was included in a special edition of The First Atlas of Russia in 1745. A detailed view of a battle during the Russo-Turkish War of 1735–1739. Canon! Units! Battles! Perfect to map out the combat scenarios in your fantasy stories.

A 17th Century brush set based on the work of Georgio Widman for Giovanni Giacomo de Rossi’s atlas published in 1692. A fantastic example of Cantelli da Vignola’s influence and a solid set for any fantastic map. This is the workhorse of antique map brush sets—perfect for nearly any setting.

An 18th Century brush set based on the work of Gabriel Walser with a focus on small farms and ruins and a solid set of mountain and hills. This is a great brush set to see how Vignola’s influence persisted across generations. It was etched over 80 years after the Widman set but you’ll find a few familiar symbols within.

A sketchy style brush set I drew myself that focuses on unique hills and mountains and personal customizability. My attempt at trying to channel the sort of map a barkeep would draw for a band of hearty adventurers. It includes extra-large brushes for extremely high-resolution maps.

Named after Austrian topographer Johann Georg Lehmann creator of the Lehmann hatching system in 1799, this is a path-focused brush set designed for Adobe Illustrator that attempts to captures the hand-drawn style unique 19th Century hachure-style mountains.

Want to stay in touch with me? Sign up for Dead Drop, my rare and elusive newsletter. Subscribers get news, previews, and notices on my books before anyone else delivered directly to their inbox. I work hard to make sure it’s not spammy and full of interesting and relevant information.  SIGN UP TODAY →